Posted at 16:16h in Weekly Digest by David 0 Comments
0 Likes
Michel Barnier is backing Spain over Britain when it comes to Gibraltar (Image: GETTY)

And media reports in Spain have suggested Britain’s withdrawal agreement with the EU will contain a specific protocol relating to Rock which could end its status as offshore tax haven.

Mr Barnier, who is gearing up for tomorrow’s EU summit in Salzburg which will be attended by leaders from across the bloc, met with Mr Sanchez at his official residence, the Moncloa Palace in Madrid yesterday.

After the meeting Mr Barnier tweeted about his “cordial” meeting with Mr Sanchez.

He added: “It is possible to reach an agreement with #UK if the integrity of the Single Market is preserved.”

Total support to Spain in its negotiations with UK on #Gibraltar

In a strong indication of support for Spain’s position on Gibraltar, he added: “Total support to Spain in its negotiations with UK on #Gibraltar , which must conclude as soon as possible.”

Mr Sanchez posted: “Thanks @MichelBarnier for the support in the negotiations on Gibraltar, we are confident to keep the current schedule for an agreement on the #Brexit.

“We are ready for the next #Salzburgsummit18.”

While Spain is for resisting the temptation to push its claims of sovereignty over the key strategic island, it is keen to secure concessions. 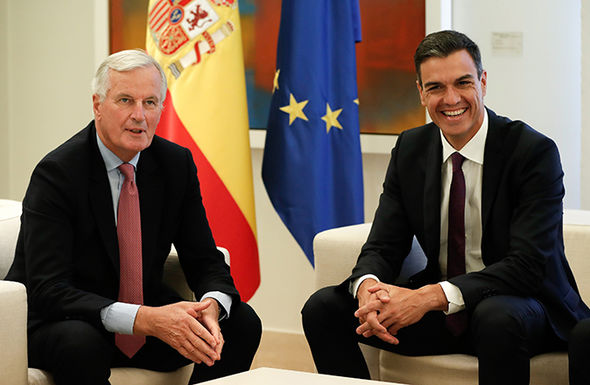 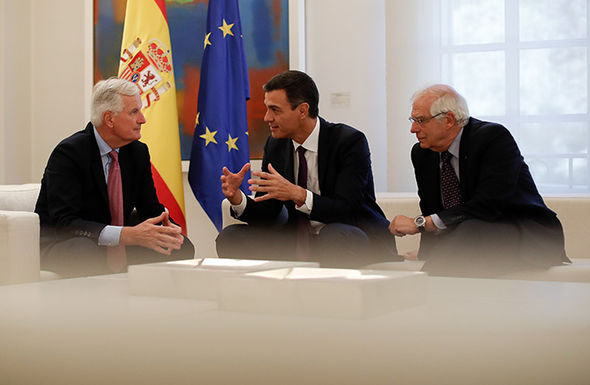 The pair were joined by Minister of Foreign Affairs Josep Borrell (Image: GETTY)

Spanish leaders have made no secret of their wish to see more cooperation from Gibraltar when it comes to taxation policy, with Spain’s Director of Customs, Pilar Jurado, in April comparing the Rock to a “bad boyfriend” and branding it a tax haven.

While aspects of Brexit relating to Gibraltar dominated discussions between Mr Barnier and Mr Sanchez, the pair also discussed the situation airline Iberia will face after Britain quits the EU, as well as others relating to the environment, fisheries and the free movement of people.

They also agreed to maintain the current schedule whereby negotiations over are concluded by October.

During his visit, Mr Barnier also met with Minister of Foreign Affairs Josep Borrell, who afterwards vowed to use Brexit negotiations to obtain “the most positive things possible” for the Spaniards of Campo de Gibraltar, the region of Spain nearest the Rock.

Buttigieg: The Rock of Gibraltar will remain British FOREVER

Speaking earlier this week, Mr Borrell said while Spain was not pushing its sovereignty claims, this should not be seen as any form of “resignation” with respect to its historical to take back control.

Meanwhile, Gibraltar’s Chief Minister Fabian Picardo has vehemently rejected Spanish newspaper El Pais’ suggestion of bilateral talks between London and Madrid to discuss the status of the island after Britain quits the EU next year.

In an article published yesterday, El Pais claimed bilateral negotiations between the UK and Spain were already underway and had “produced some progress”.

The report cited “three sources familiar with the situation” as suggesting these were centred on addressing the problems that Spain faces due to Gibraltar’s special status within the EU, where it is not part of the customs union and exempted from the Common Agricultural Policy (CAP). 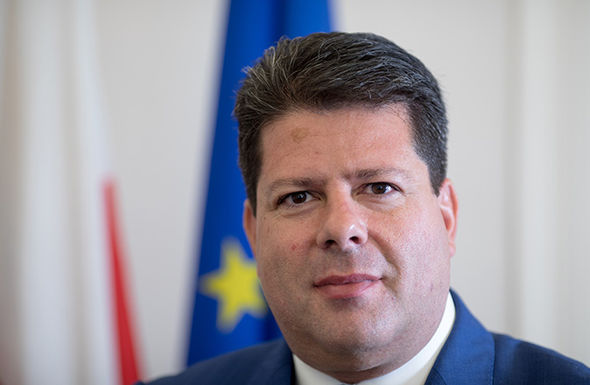 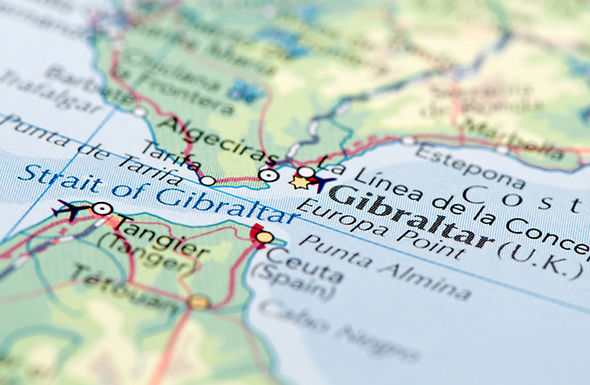 Gibraltar has been a British overseas territory since 1713 (Image: GETTY)

However Gibraltar’s Chief Minister Mr Picardo refuted the suggestion, which he branded “untrue” and “misleading”.

An official Government press release shared on Mr Picardo’s Twitter page stated: “Her Majesty’s Government of Gibraltar can confirm that there is no separate bilateral process of dialogue between the United Kingdom and Spain in respect of Gibraltar in the context of Brexit or otherwise.”

Mr Picardo added: “Key aspects of the article in El Pais are factually incorrect, for example the references to detailed Ministerial exchanges by letter.

“What is true is that we are working on the inclusion of Gibraltar on the Withdrawal Agreement with some terms which are differentiated from the terms applicable to the rest of the United Kingdom as required by our geography and our current terms of membership of the European Union, exactly as we have already announced we are working to achieve.”

Gibraltar has been a British overseas territory since 1713.